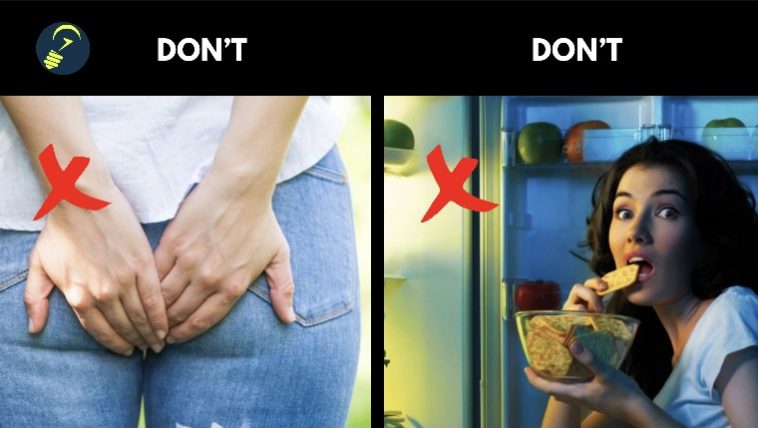 Before it’s too late, check below list if you’re unconsciously doing these bad health habits!

Whether your fart has really terrible smells or it loudness makes everyone in the room can hear, don’t even think of holding your fart!

Of course, the dangerous part is not the smell of the fart. Fart is actually a body system mechanic to remove excessive gas in your body.

For instance, when you’re having cold or eat a lot of gassy food, your body will balance it by throwing the gas out through the fart.

If you hold it, it will cause you bloated and discomfort at your stomach area. If you do this habits too frequent, it can have a bad impact to your health.

So, instead of holding your fart, you can just step aside from the crowd and find a quiet place to fart!

Read Also: 10 Unconscious Habits That Can Damage Your Eyes

Eating fast when you’re hungry is fine. But don’t over do it!

A research conducted by University Hiroshima in Japan on 642 men and 441 women for 5 years. They found that the fast eater are more likely to have metabolic syndrome including three main risks factor such as obesity, high blood pressure, and high level of bad fats.

Other impact that we can conclude is by eating too fast it can actually makes your diet fails.

In our article about tricks to stop being hungry, we pointed out that rushing your meal is actually just making you end up eating more. This is because your stomach does not have enough time to send the signal to your brain.

Those countries with their hot climate and dust makes their occupant to bath more than usual. Yes, too cool down their body and have a refreshing sensation. We all know how unpleasant to have the sweat sticky feeling on our body.

Meanwhile, there are also some mental illness that makes some people are “too hygiene” and bath too often.

Well, being hygiene is not bad as it can get rid of bacteria, dust, germs and sweat that stick on our body. However, if you shower too often, it can make the natural oils in your body gone!

This natural oil is useful for maintaining skin moisture. When this oil disappears, the skin will become dry and irritated easily.

Read Also: 10 Habits That You Don’t Realize It Actually Can Cause Hair Loss 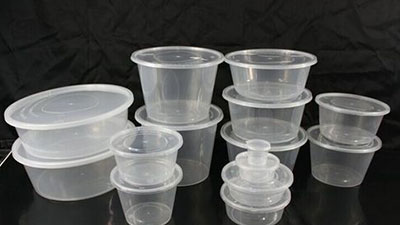 Simple, easy to carry anywhere, shatterproof, easy to clean, and if it is lost it will not be a problem making people prefer to use plastic containers for storing food rather than containers made of glass or glass. In fact, from a health perspective, it is better to use glass material containers instead of plastic.

You need to know that most plastic containers are made from chemicals called phthalates. This material is very dangerous for the body because it can interfere with the body’s hormone system.

As a result, development becomes inhibited, reproductive hormone disorders, and nerves. Not to mention that recycled plastics can release even more dangerous chemical compounds into food.

Some people unconsciously bite their nail when they’re nervous. Although, some of the scientists claims that biting nail is actually more into mental disorder rather than bad habit. Still, nail biting is one of the common habits that are actually bad for health.

According to the research, human’s fingernail contains bunch of germs and nasty bacteria. The researcher stated that the space between the human’s finger and nail is a perfect environment for these bacteria and germs to grow at the perfect moisture level.

Well, if you’re curious what are the other impact from this habit, check out 7 Gross Things That Happen When You Bite Your Nails.

It is true that a balanced diet is required to achieve the ideal body weight. One of the important nutrients needed to help the diet is protein.

However, most people think that because protein is an important nutrient for their diet, they consume large amounts of protein to reach their target faster. This is where it got wrong!

Keep in mind that our bodies have a mechanism to get rid of excess nutrients that are not needed by the body. Likewise with protein, if it is consumed in excess it will be wasted.

In addition, consuming foods that contain high protein will make the kidneys work harder. This can lead to frequent thirst, little urination, and damaged kidney.

Not much different from holding fart that we discussed earlier, sneezing is also one of the body’s mechanisms for removing irritants in breathing in the nose.

Sometimes, sneezing is accompanied by mucus from the nose and mouth saliva. That’s what makes people look disgusted. But it’s not a wise thing to hold back the sneeze.

Did you know that our sneeze can reach speeds of 160 km / hour? So holding back sneezing is the worst thing you don’t want to do.

Some of the fatal risks that can occur from holding in a sneeze such as fractures in the cartilage of the nose, nose bleeds, and even a separate retina. So, remember to don’t hold your sneeze! Just get out from the crowd and sneeze. Clean your nose in the toilet afterwards!

8. Earphones “All The Time”

The sound from outside could not be heard. But it turns out listening through earphones continuously is not a good thing.

Using earphones means bringing the sound source closer to the ear. In the ear there is a thin membrane called the eardrum.

This eardrum has a limit on how loud a sound can be received. Maybe now you feel that it doesn’t really impact your hearing. But overtime, your eardrums become immune and you will have difficulty hearing smaller voices because you are used to hearing loud sounds.

Midnight can be a hungry time for some people where they like to enjoy their midnight snack. If you’re one of the midnight snacker, do you feel your stomach bloated and go up when you woke up in the morning?

This is because eat before bed time can cause acid reflux and makes your stomach work hard during the sleep.

Before sleep, it is recommended to give a gap minimum 3 to 4 hours to avoid eat anything. If you want to reduce your flux and improve your health, try to reduce this bad habits.

So, is one of the “bad health habits” above considered to be your daily habit without you realizing it? Share this article to your dearest and save them from these bad health habits!