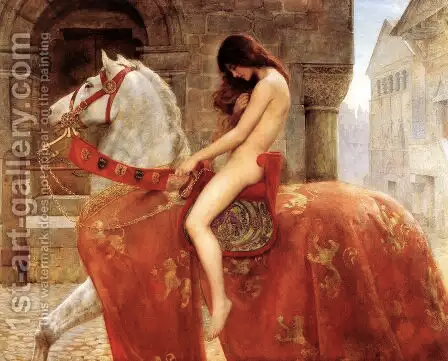 When art lovers start to talk about horse paintings, “Whistlejacket” by George Stubbs is most often part of the discussion. This painting is probably the most famous horse painting in art history. It measures 115 by 97 inches and portrays a real-life racehorse named Whistlejacket.

But apart from this iconic depiction of a horse, there are various other horse paintings by top artists. Frederic Remington, John Maler Collier, Jacques Louis David, Rembrandt Peale, and Rembrandt van Rijn are a few of the many famous artists who created horse paintings. In this article, we’ll look at some of European art’s most famous horse paintings.

A Dash for the Timber by Frederic Remington 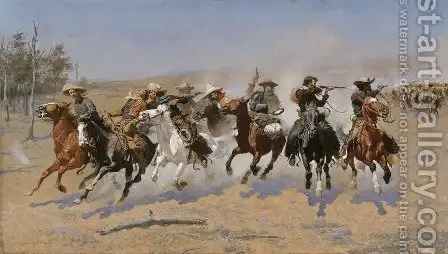 “A Dash for the Timber” is an Impressionistic painting by Frederic Remington in 1889. The painting depicts eight mounted cowboys with their packhorse in full gallop, racing for the cover of the trees ahead. They are ahead of a war party of Indians on horseback and three of the cowboys are shooting over their shoulders.

Remington skillfully portrayed the horses with nostrils flaring and muscles straining. And you can see signs of determination on the riders’ faces. The painting is a visual description of the American frontier. Viewing the painting, you feel the riders galloping directly toward you. The viewer cannot help but immediately get engaged in the picture.

Remington created this painting in his studio when he was twenty-eight years old. It was created after many journeys to the frontier and observations of the activities of the U.S. Cavalry. The painting received favorable reviews at the National Academy of Design in New York, and art historians regard this painting as the launching of Remington’s painting career.

John Collier created several works depicting various legends from his native England. And one of his popular works is his interpretation of the legend of Lady Godiva. The legend of the nude ride was first recorded in the 13th century.

According to the legend, Lady Godiva appealed to her husband to reduce his high taxation on the people of Coventry. Her husband told her that he would grant her request if she would strip naked and ride on a horse through the streets. She took him at his word and asked everyone to stay indoors and close their windows and doors, and then she rode through the streets clothed only in her hair.

The painting was created in 1897 in the style of the Pre-Raphaelite Brotherhood. It is highly realistic and depicts Mab Paul, a model and theater actress of the time, mounted atop a white stallion fitted with a royal robe, saddle, and halter. 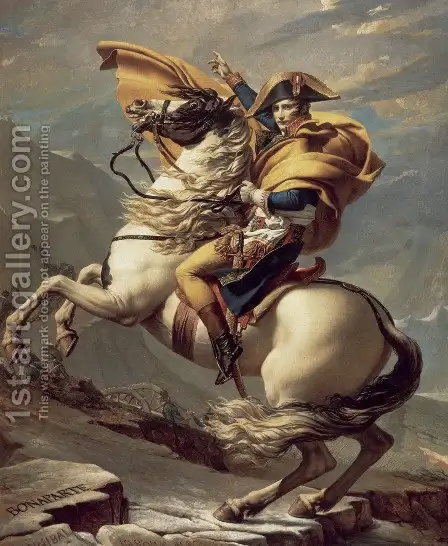 “Napoleon Crossing, the Alps” is not just one painting. It is a series of five oil on canvas equestrian portraits of Napoleon Bonaparte painted between 1801 and 1805 by the French artist Jacques-Louis David. This artwork is one of David’s most famous horse paintings and one of the most reproduced images of Napoleon. It shows a solid idealized view of Napoleon crossing across the Alps through the Great St Bernard Pass in 1800.

After Napoleon had crossed the Alps, a traditional exchange of presents between Charles IV of Spain and Napoleon took place. One of the gifts to Napoleon was a commissioned painting by the painter David. The French ambassador to Spain requested the original painting from David on Charles’ behalf. The painting was to hang in the Royal Palace of Madrid as a goodwill gesture of the new relationship between Spain and France. David accepted the commission.

Napoleon instructed David to produce another 3 “copies” – one for the Château de Saint-Cloud, one for the library of Les Invalides, and one for the Royal Palace of Milan. A 5th version was also produced but remained in David’s workshops until his death. In reality, the crossing had been made on a mule, but from the beginning, the painting was commissioned to be used as propaganda, and Bonaparte asked David to portray him mounted on a fiery steed.

In 1808 Rembrandt Peale painted “Equestrian Portrait of George Washington.” Peale was an artist who captured the heady days of the post-Revolutionary United States with his art. His “Equestrian Portrait of George Washington” is a reminder of the origins of the United States. This painting was done by Peale from memory and available fragmentations. Although it was done from memory, Peale’s canvas tells the story of early American patriotism.

In 1795, when Peale was 17 years old, he did his first painting of then-President Washington. For decades, Peale’s sketches from life provided the basis for many of the images of the first President. The original 1795 portrait has since been considered one of the most elegant studies of Washington.

In “Equestrian Portrait of George Washington,” Washington towers into view astride his horse, seemingly staring at the viewer. Peale wanted to promote the memory of Washington as an unequaled leader, remaining mounted and leading the fore.

“The Polish Rider” is a seventeenth-century painting by Rembrandt van Rijn. It was created around the 1650s and is on the list of the most famous horse paintings. It depicts a young man traveling on horseback through a murky landscape.

Art historians have debated for centuries whether the painting was intended as a portrait of a particular living or historical person, and if so, of whom. And if it was not a specific person, what was it intended to represent?

Some art scholars believe this painting is not a Rembrandt artwork but a creation by one of his students. One of the reasons they used to validate their theory is that Rembrandt rarely worked on equestrian paintings. The only other known equestrian portrait in Rembrandt’s portfolio is the “Portrait of Frederick Rihel,” 1663.

Many famous artists created excellent and often iconic horse paintings. For many art scholars and art lovers, the history of equestrian and other horse portraits can be an exciting study.