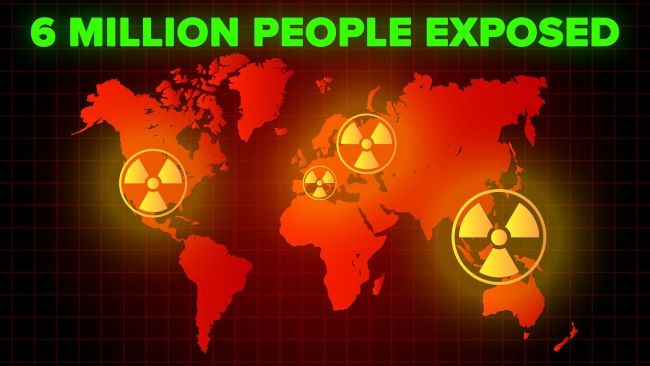 Exploring the world could be one of your bucket list items. However, there are some places that you should avoid going to unless you have a radiation suit to hand: the most radioactive places on earth!

These places have a very high level of radioactive or radiation that could harm your health such as nausea, hair loss, DNA damage, and even death!

It is important for you to know these places so that you should pick them out when visiting a specific country.

Everything went normally until a disaster occurred in 2011. There was an earthquake with a magnitude of 9.1 which caused a tsunami. The reactor survived the earthquake, but the tsunami caused the seawater pump to shut down. The water, which is used to cool the hot nuclear reactors, doesn’t work. As a result, 3 reactors experienced leakage of radioactive material.

Even though this incident has been happening for a long time and the nuclear reactor has been closed, the level of radioactivity in the area is still high. Until now the Japanese government is still trying to find ways to reduce radiation levels so as not to threaten human health and the environment.

Chernobyl is a nuclear power plant located near Pripyat. Consisting of several reactors, reactor number 4 experienced an explosion. This explosion made radioactive material out in large quantities, spread throughout the Soviet Union and Europe places.

This incident occurred on April 26, 1986. Today, the area is still closed and left abandoned. It is not recommended to enter the places for fear of being affected by the effects of radiation.

The UK has a nuclear power plant located in Sellafield. Today, the site is used for nuclear reprocessing and decommissioning. As much as 2.3 million gallons or 9 million liters of nuclear waste are produced and thrown into the ocean every day. The waste is dumped into the Irish Sea and makes it a highly radioactive sea places.

One of the mining town in Kyrgyztan, Mailuu-Suu sits on top of nuclear waste. If there is news that the residents of the city of Mailuu-Suu have cancer and other health problems, it is because of the high level of nuclear radiation there.

Mailuu-Suu is not a place for nuclear weapons testing, power stations, or production, but indeed Mailuu-Suu is very rich in uranium. The Soviet Union carried out massive uranium mining at Mailuu-Suu. In the event of seismic activity, this uranium can be released and pollute the rivers.

As one of the superpower countries, Russia has a terrible arsenal. Especially if it wasn’t nuclear weapons that made Russia so feared. The industrial area in Mayak is one of the places for plutonium production and nuclear production. The nuclear incident, known as the Kyshtym Incident, occurred in Mayak.

The radioactive explosion occurred in 1957. The incident was successfully covered up by the Russian government until it was revealed in the 1970s. As many as 80 tons of radioactive substances released due to an explosion. Nuclear material spread over an area of ​​52,000 km2. In the 1950s, sewage from the factory was dumped into Lake Karachay, polluting the lake’s water.

The Soviet Union broke up in 1991, causing the facility to stop producing plutonium and uranium. The place is now used as a dangerous nuclear weapons storage. Not only as a storage place, the rest of the nuclear waste disposal is also stored there. No wonder the radiation level is very high.

Somalia is one of the countries in the world that has problems with poverty. The high poverty rate makes many people who commit crimes to survive. So it is not recommended to vacation in this country. Apart from being known for its high crime rate, there is one place in Somalia that has high levels of radioactivity.

The place in question is the coast of Somalia. The coast of Somalia is used by many people to dispose of illegal garbage. The political turmoil that never ends has made the Somali government unable to control what is happening in its country. Continually disposing of this illegal waste makes the environment polluted. High radiation makes underwater and coastal life seriously damaged.

Ths Instituto Goiano De Radiotherapy is a radiotherapy institute located in Goiana, Brazil. In 1985, the institution moved the institution to another location. Of course, important items were moved along. Unfortunately there are a number of items that actually have to be brought but left in the old location.

Until finally in 1987, there was a group of robbers who wanted to take valuables that were still left in the old place. These robbers stole teletherapy including cesium-137. This causes the radioactive substance to escape and spread over a large area. A total of 250 people were exposed to radioactive radiation in surrounding places and 4 died.

Cold Ward involving the West and East, made many countries vying to make nuclear weapons. The goal, especially if not just in case one day there was a war. America is one of the countries that is very passionate about making nuclear-powered weapons.

American nuclear weapons production was carried out at the Hanford Site. A total of 60,000 nuclear weapons were produced there. Including that is a terrifying nuclear bomb called Fat Man. Fat Man was used to destroy Nagasaki in 1945. Even though it has been deactivated, the level of radioactivity in the places is still very high. Even though the USD Department of Energy said it had buried its trash underground, the water in the ground was continuously contaminated.

When the Soviet Union was still around, Kazakhstan became a test site for nuclear weapons. The exact location is in Semipalatinsk, as many as 4556 nuclear bombs were dropped on that place.

Local residents still remember there were so many mushroom clouds caused by nuclear bombs. Obviously radiation from nuclear is a threat to the health of the surrounding population.

The Kazakh government, which has no interest in nuclear weapons, is loudly calling for the International Day Against Nuclear Tests.

The above places and stories are the prime example of what a huge event and tragedy caused long ago.

If you’re a world traveler, don’t forget to avoid these place so you can prevent exposing yourself to unnecessary health issue.

Jayden is a guest post editor and part time contributor at Life Hack Solution. For guest post queries, reach out to info@lifehack-solution.com.

Close
Send this to a friend