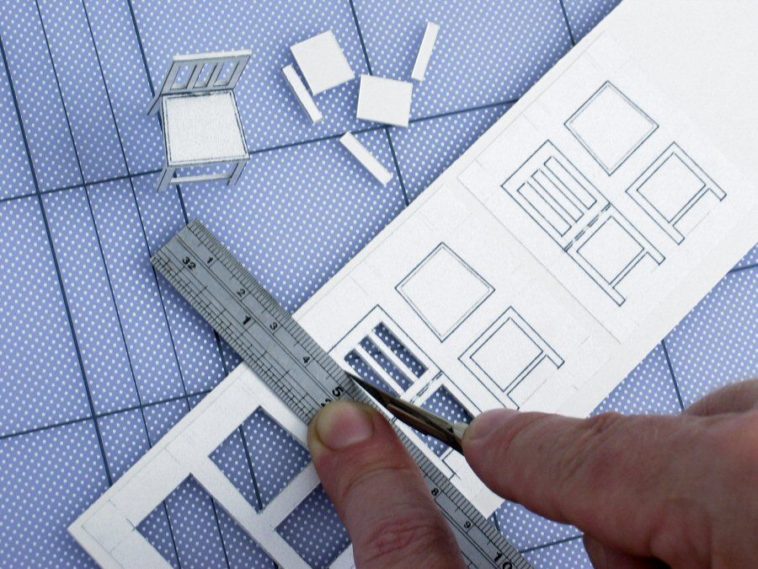 The following is intended to be a primer on the ‘white card model’ in film/tv design work, what it should include, and the materials one may use to create it. It’s simply an overview of alternatives in the case of the supplies and methods presented. It doesn’t go into detail on how to construct.

It’s critical to clarify right away that the term “white card model” is meant in this case and not the other, a more common occurrence. The exploratory, frequently rough and inexact, sometimes coloured sketch model is often referred to by the same name, especially in theatre. In many ways, the present context is anything but rough and inexact; rather, it is usually placed at the end of the chronology of design stages.

Although the film/television set designer has complete freedom in developing and recording a set design concept, during the early phases they may utilize rough or “sketch” models, as well as the so-called “white card model,” which meets every stringent criterion at the end. It is usually created after the design has been completed, most often including the detailed technical drawings for the set’s construction. As a result, it is essentially a three-dimensional ‘blueprint’ of the planned design.

It’s not always a realistic, immersive depiction of what the set will look like, let alone how it’ll look in the film. It may give no clue about colour, and little information on texture and materials, but it does provide all of the most important details about space, structure, moveable components, and their practical implications.

The designer may create a prototype earlier in the design process to assess the three-dimensionality (to analyze general proportions, to better visualize filming possibilities, etc.) but these things have usually all been decided by the ultimate stage, and here the model presented is more of a communication device than a ‘testing’ tool.

It is used to notify the rest of the crew. It informs the director and cinematographer about how much space there is for whatever action is necessary for a film, as well as provides an overview of what will be seen behind it (this supports the importance of producing technical drawings/models with some graphic indication of surface textures etc.).

It also tells the cinematographer, as well as the camera, sound, or lighting crews, how much room there will be for equipment and whether any barriers such as pillars, steps, or levels need to be planned for. This view provides a high-level perspective for the technical team that is building and furnishing a set (or updating or creating one) of how much labour is needed. It offers the same information to financial officials so they may evaluate expenditures.

Making a model is an interesting and creative process. Many materials can be used for making models, but foam board is some of the best. They are easy to work with, and they come in a variety of colours. In this article, we have provided tips on how to make a model using foam boards. We hope you find these tips helpful!