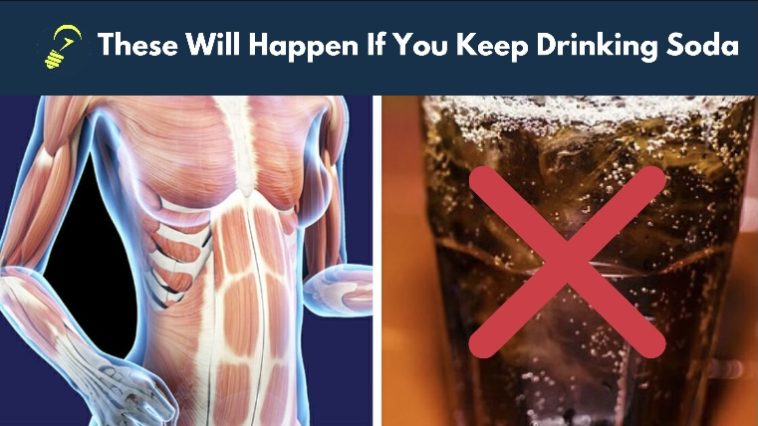 Soda can be refreshing after the tiring sports or during the hot day. However, do you know if there is a danger behind excessive consumption of soda? In this post, we’re going to cover the reasons why you should stop drinking soda.

A team from the National Institutes of Health conducted an investigation on 465 people with kidney problems and 467 people who were healthy. They found that people who drank 1 or 2 sodas per day increased their risk of developing kidney disease by 2x as much as those who did not drink soda.

These results were published in a journal entitled Epidemiology in July 2007. The researchers also found that the phosphoric acid contained in soda affects the quality of urine and can also cause kidney stones.

If you still love your kidney, stop drinking soda!

Whether diet soda or regular soda, all sodas contain phosphate or phosphoric acid, which gives the soda a tangy taste and makes soda last a long time in packaging. Phosphates are also found in other foods such as meat, nuts and milk.

Consuming too much phosphate-containing foods can cause several health problems such as heart, kidney, decreased muscle mass, osteoporosis and the latter can cause premature aging.

So, if you don’t want to get older look, try to stop drinking soda!

3. Increase Fat in Your Body

There’s a reason carbonated drinks are very much likely link with obesity. And this is not an understatement!

In several recent studies related to the adverse effects of soft drinks, found that drinking soft drinks can cause an increase in the amount of fat around the liver and skeleton area. Both of these problems can cause health problems such as diabetes.

The study revealed that people who drank soft drinks every day for a period of 6 months experienced an increase in fat by 132 percent to 142 percent in the liver area, 117 percent to 221 percent in the bones area and 30% in the blood and other organs.

Besides the amount of fat, soda can increase the percentage of cholesterol by 11%. These results are much bigger when compared to water.

Read Also: 10 Reasons Why do Most Diets Fail

In fact, soft drinks also have a negative impact on dental health is one of the strong reasons why we don’t consume carbonated drinks too often.

As mentioned above that soft drinks contain phosphoric and carbon acids. These 2 acids cause tooth decay by increasing the acid level in the mouth. The combination of soda acid with sugar can also cause more serious problems. Sugar makes it easy to digest the bad bacteria found in the mouth. But when sugar meets acid, it can lead to dental problems.

Read Also: 12 Ways to Relieve and Cure Toothache Without Going to Dentist

Almost all soft drinks in cans contain a substance called Bisphenol A (BPA). This substance is useful for preventing phosphoric acid contained in soft drinks from reacting with metals. BPA is also responsible for health problems such as hormone disorders, fertility problems, obesity, diabetes, and also causes of cancer.

In light of the dangers of BPA to humans, the Centers for Disease Control and Prevention has already banned the use of canned soda in several restaurants, schools, and also soft drink companies.

Soft drinks that contain phosphoric acid and this acid can cause various complications for our bodies, such as one of which is porous bones. More precisely bone loss or osteoporosis.

It has been mentioned above that soda cans contain a substance called Bisphenol A (BPA). Substances that can cause health problems such as cancer are also have an unhealthy effect on human reproductive hormones.

Apart from being found in soda cans, BPA can also be found in plastic baby bottles, mineral water bottles and canned food. BPA is said to cause abnormal puberty and reproductive problems.

8. Increase The Risk of Heart Disease

Apart from containing phosphoric acid, soda also contains sweeteners. It is no longer a secret, where in the 60s and 70s it was said that consuming excessive sweetened drinks was closely related to heart disease. It is clearly that consuming sugary drinks can increase the percentage of heart problems.

A study that was conducted involving 40 thousand men in 2 decades, found that people who drink sugary drinks in 1 day increase the risk of heart attack by 20% compared to normal people. This alone may be reason enough not to drink soda.

Here comes one of the biggest reasons why we should start stopping drinking soda. Who would have thought that drinking soda could have negative effects that could lead to brain disorders.

According to health consultant neurosurgeon Russell Blaylock, M.D. said that diseases related to the brain have appeared more and more frequently in recent times and in an alarming condition.

Xiao Tian Wang, a researcher at the University of South Dakota found results published under the title Psychological Science in 2010. In these results it says that drinking soft drinks that contain artificial sweeteners will only provide temporary pleasure. Not worth the risk that will be obtained at a later date.

FAQ: How About Diet Soda? Is It Safe?

As noted above, it is no longer surprising that drinking soft drinks can have a negative effect on weight gain. But what about Diet Soda like Diet Coke for example? It turns out that the negative effects are not much different.

Even more surprising is that diet soda can cause weight gain. Researchers from the University of Texas Health Science Center looked at 475 adults in the past 10 years and found surprising results.

A separate study conducted using mice as guinea pigs found that the aspartame contained in soft drinks increased glucose levels in the blood, resulting in weight gain. In the end, when the body contains a lot of glucose, the glucose will be converted into fat.

Now, you know the reasons why you should stop drinking soda. Well, at least try to limit it at least once a week.

Alexandra is the content reviewer & senior author at Life Hack Solution.
Reach out at info@lifehack-solution.com.