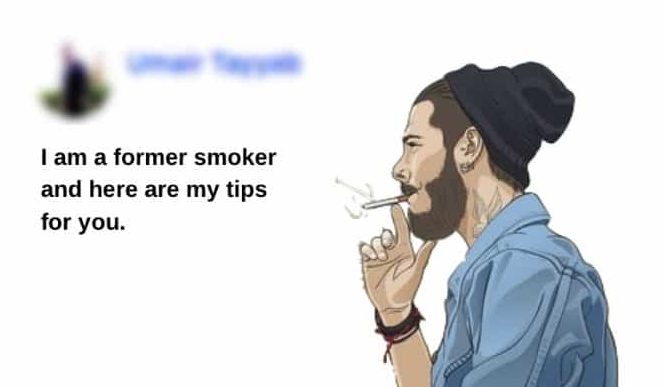 If you want to live a healthy life, quit smoking is a must.

However, it is difficult to quit especially for people who already addicted where as it is a big challenge for active smokers.

It always has been a difficult start for someone who wants to quit smoking. You want to overcome it, before you have to prepare many things in advance.

In fact, people who are addicted to cigarettes find it really difficult to stop and recover from it quickly. Proper preparation is needed for an active smoker.

A health education specialist Marra Williams said that someone taught himself how to smoke, and had to learn for himself also how to stop smoking.

No wonder many people are aware that smoking activities undertaken so far have a negative impact on health will find effective ways to stop smoking.

Diseases due to Smoking Addiction

In advertisements on television, radio, billboards, to the cover of the cigarette pack itself it has been explained that smoking can cause addicts to suffer from many health problems.

However, there are still many cigarette consumers in the world even the number is increasing every year.

The following chronic diseases that may be suffered by active smokers:

Here are the tips to quit smoking from a former smokers:

Stress is one of the causes for someone to smoke. If stress is unavoidable, do things that relax you other than by smoking such as yoga, massage or maybe listening to music with the genre you like.

If you already have a strong decision to stop smoking, it helps by telling it to close relatives who always meet every day.

In this way you will be greatly helped when you forget and even want to smoke again. To avoid this, try doing some activities that can make you forget not to smoke while in the office.

3. Find Alternative to Replace the “Addiction”

It is hard to differentiate between addiction and habit. Sometimes our addiction to cigarette might be just caused by some habit. For instance, maybe you have the habit of smoking after eat or maybe smoking in the toilet.

When you quit smoking, it is normal to feel that something is missing when you’re now no more have a cigarette after eat and at toilet. If you find it so hard, you can try to replace it into a new habit.

Here are some options of the alternative:

This therapy is an alternative that has not been scientifically proven. However, you can try it by following the instructions of a therapist who already has a license, it never hurts.

To stop smoking, you can also change bad eating habits to a healthy diet. This is very important to do to help you quit smoking.

The nicotine content in cigarettes has the effect of reducing your appetite for your taste buds. A healthy diet when stopping smoking can be a way to supplement your body’s nutrition to lead a healthy life.

Being busy also proven to help you distract your mind from smoking urge. Just keep yourself busy like doing house chores, reading, and etc. By doing this you’ll make yourself lesser opportunity to smoke.

Doing exercise can help reduce your desire for nicotine. When your desire to smoke comes, do sports like walking, swimming or running. Hanging out with people who have healthy lifestyles also really helps you to quit smoking.

The way this NRT works is by releasing low levels of nicotine continuously into the blood vessels. However, the nicotine element used is different, with no carbon monoxide, dangerous chemicals and tar in it.

With this therapy can help reduce the body’s desire to return to smoking even though the body begins to feel the loss of nicotine that is commonly entered. NRT has a variety of media, some in the form of tablets, gum, plaster and mouth or nose spray.

Factors or habits that can trigger you to return to smoking should be avoided if you really want to quit. Examples of habits such as drinking coffee, drinking liquor, hanging out with friends who smoke, this triggers you to smoke again.

Eliminate all the cigarette and ash ray from your house and car. If you want to totally quit, you need to do it all in!

If you are one who has the habit of smoking after eating, replace cigarettes in other ways, such as chewing gum without sugar. Avoiding triggers will be very effective as a way to stop smoking.

Quit smoking through hypnosis is believed to change behavior. When hypnotized, you feel you can be more relaxed, able to concentrate, and willing to listen to advice to stop smoking. Because of the different practices, its effectiveness in quitting smoking is difficult to study. However, some people claim to feel the benefits.

Smoking is like putting thousands of poisons into our body. The poison is not only harmful to the lungs, but also the heart, liver, and even all the organs in the human body. However, the habit of smoking or accumulating poisons over the years can also be cured when someone decides to stop smoking.

The following is what will happen to the body after it is no longer exposed to toxins from cigarettes:

As blood flow is smooth, the risk of people who stop smoking from a heart attack or stroke begins to decrease. This is because the blockage of blood flow to and from the heart is slowly opening. The level of nicotine in the blood has also been significantly reduced.

Within three days, you would feel improvement in the breathing. This is because various blockages in the lung tube are removed, making carbon dioxide exchange with oxygen in the lungs easier. The capacity of the lungs to hold oxygen is also greater after clearing these blockages.

One Week Without Cigarette

Not smoking at all within one week is arguably a separate achievement for a cigarette addict. The reason is, smokers who can reach this point have a 9-times higher chance of success in quitting smoking than those who are unable to resist the temptation in one full week.

Within two weeks of quitting smoking, you may feel lighter and walk better. This is because blood circulation to and from the lungs is smoother and lung capacity increases by 30 percent compared to when you were still an active smoker.

One Month Without Cigarette

In just one month after quitting smoking, dad can feel that his stamina has risen sharply. Various health problems that occur when the father is still smoking are also increasingly reduced, such as blockages in the nose due to a buildup of mucus and choked breath. In addition, lung cells have fully returned to normal levels so that they are stronger in protecting the lungs from various infectious diseases.

After 6 months of being clean of cigarettes, you will feel less stress due to not being able to smoke. In terms of health, you will also has less cough, or if the cough no longer issued a lot of mucus like when you were smoking. This is because the respiratory tract is no longer swollen due to exposure to toxins from cigarettes.

You will feel a lot of improvement and relief compared to when you were smoking, the body is also lighter because it is free of most toxins due to the continuous consumption of nicotine.

Within three years of stopping smoking, father will be free from the risk of a heart attack as if he had never smoked before. Smoking also increases bad cholesterol levels in the blood which block the flow oxygen to and from the heart thereby increasing the risk of heart attack. After you decided to quit smoking, the fat level will reduced to normal levels after three years the body was not entered by dangerous substances contained in a cigarette.

Based on research conducted by the University of Carolina, United States, people who stop smoking will have a risk of developing lung cancer 50 percent less after three years than when they were still an active smoker.

Yes, it does take a long time for cigarette addicts to remove all the poisons caused by smoking. However, with the many benefits gained by not smoking, it’s never too late to stop smoking from now.

The effects felt by everyone after quitting smoking are also relatively different. People who accompany smoking cessation with exercise or a healthy lifestyle will return to find their normal metabolism faster than people who simply stop smoking without doing other healthy living efforts.