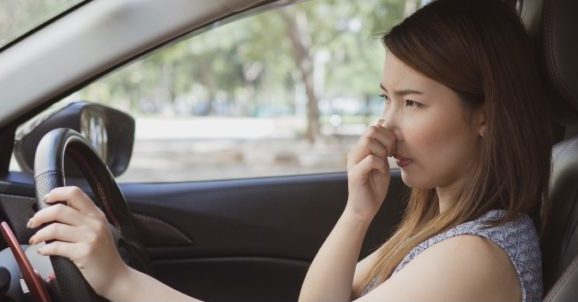 Have you ever smelled a bad smell from the car? These bad smell in the car is definetely disturbing, and can make your trip that should be fun becomes unpleasant! Let’s learn how to get rid of the bad smell in car with a simple and natural ways!

The smell of a car cabin can come from many sources ranging from foods, drinks, cigarettes, used clothes, shoes, and various other forms of dirt.

The use of fruit-scented car fresheners is sometimes not enough to get rid of these bad smell in a car.

There is a simple and natural way to get rid of bad smell in your car. Some of the ingredients can be found in your own home kitchen. Check out below!

Besides having a delicious taste, it turns out that coffee is also able to repel various types of odors. In fact, it is no longer a secret. Many people use coffee grounds as air freshener in their homes or coffee shops. This of course can also be used to drive the new ones in the car cabin.

The method is quite easy; spread coffee grounds in areas prone to odors such as upholstery and under carpets. Let stand overnight so that the coffee aroma spreads. Then vacuum to clean it.

However, you have to pay attention to not get the coffee grounds wet as this will make it difficult for you to clean them.

Vanilla is better known as a food or cake flavoring that makes the taste more delicious. Apparently, not only as a flavor enhancer, but vanilla is also able to get rid the bad smell that has been staying in the car. And even replace it to vanilla smell!

Pandan leaves are a kitchen ingredient that is often used to give food a fragrant smell. Usually when you want to cook rice, make green bean porridge and others. Not only that, pandan leaves can also get rid of the bad smell in the car effectively.

Because pandan leaves are elongated, so you have to cut the pandan leaves into small pieces first. After that, just spread it on the part of the car that smells evenly. This method is a little dirty, but quite effective in getting rid various types of bad smell in your car.

The next kitchen ingredient that can be used to get rid of bad smell in the car is baking soda. The ingredients that are often used when making this cake can be found easily in various cake shops.

How to use it is by sprinkling baking soda on the car. Another way, so that the car doesn’t look dirty, is by using a container that has been perforated. Let stand a few days to be more optimal, if necessary replace it for every two days so that the smell of the car will be removed effectively.

Vinegar is not only a food flavoring with soup to make it taste fresher. However, vinegar can also get rid of any bad smell that appear in room and even car.

Simply by putting the vinegar in the car overnight. The next day the stench from the car cabin will disappear. Don’t worry, it won’t be replaced by the strong smell of vinegar.

7. Open the Window for Car Circulation

Air circulation is necessary to keep the car smell fresh. Therefore, if the car is going to stay for a long time, you should open your windshield a little. Remember, just a little, because if it open too wide, it will provoke crime.

It’s safer if your car has used gutter accessories, so if the glass is open a little, no one will see it because the top of the glass is covered by the gutter.

The second way is to open all your car doors when you want to use the car or after using the car. You only need to open all the car doors. It doesn’t take too long, because the goal is for the air in the cabin to flow and it is hoped that it can throw hot air out of the car cabin.

It’s useless if the smell is gone with kitchen ingredients, but car owners can’t take care of it properly. Of course, the smell that comes from dirt will continue to emerge. For that, pay attention to the cleanliness of the car. Make sure to vacuum in the car two to three times a week.

Here are things you need to pay attention on the cleaning:

The ac filter is the main source of odors in the car due to the entry of air from outside through the ac vents.

To clean it is enough to wash the filter. Before cleaning, you have to make sure that the air conditioner has a filter or not. If not, you must immediately install it to reduce dirt entering from the outside.

Car seats are also a source of odors. Usually, the seats that change color become dull a sign that the area is dirty.

Dirty chairs are mostly caused by the sweat that sticks to the clothes which then sit and stick to the bottom of the chair or back of the chair, over time the sweat will cause a bad smell on the chair.

Car carpets can also cause odors due to the dirt carried by the footwear getting into the car, food scraps that have fallen on the carpet, cigarette ash or even rainwater that soaks the shoes and sticks to the car carpet. “To clean the carpet, you can wash the rubber carpet, while the basic carpet can be dried with air or a hair dryer”

If the manual method is still ineffective or the musty smell problem is severe due to something like being submerged in a flood, friends are advised to bring the car to the car for handling interior care.

This method can be used to keep the smell and freshness in the cabin of your favorite car. However, the selection of fragrances must also be considered and selected carefully. Because if it’s wrong, you could get dizzy because of the fragrant smell it produces.

However, the it will be more effective is to choose a deodorizer in the form of a liquid. Try not to use solid or gel fragrances. Both types of fragrances can leave stains or crusts when placed close to the air conditioner.

In addition, if the solid or gel fragrances are exposed to sunlight, it can leave stains on the dashboard, the worse the two types of fragrances can give off a musty smell.

Close
Send this to a friend