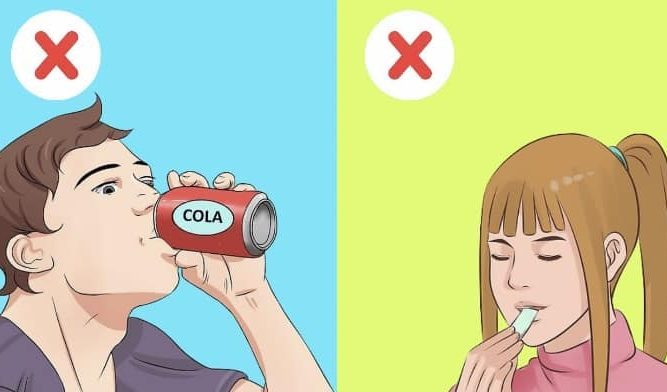 Burping frequently and continuously is one of the sign that your health problem. In this post, we’re going to explain to you completely on the causes, impact, and how to stop burping. Stay tuned!

Burping or belching is a normal process from the body to release gas in the digestive tract. This bodily function may sound simple but difficulty belching can make the stomach feel bloated, uncomfortable, and disrupt your day.

When is Burping Considered a problem?

Burping too much without specific reason could be an indicator that your bad digestion health. Burping frequency should be watched out, especially if you have never experienced it or accompanied by a feeling of arousal in the stomach.

Knowing the cause of the frequent belching that happened too often is certainly important before you learn how to stop burping. Here are some causes that can be the trigger:

Aerophagia is a condition when someone often swallows air, both consciously and unconsciously. The exact cause is unknown until now, but this is usually triggered by eating too fast, chewing gum and drinking water too fast.

GERD or acid reflux disease occurs when stomach acid returns to the esophagus. As a result, you can often experience belching.

This indigestion can make the stomach in the middle of the upper part feel painful and uncomfortable because of the production of excess stomach acid. Besides belching, you can experience bloating, nausea, and vomiting.

Gastritis is inflammation of the stomach wall. Symptoms vary from person to person, even most people have no symptoms at all. This inflammation is triggered by frequent consumption of alcohol, spicy foods, and acids.

This type of bacteria can cause infection in the stomach, which then triggers symptoms with increasing frequency of your belching. Helicobacter pylori is a bacterium that can develop in the digestive tract, especially in the stomach. The people most vulnerable to this infection are people living in environments with poor sanitation, densely populated homes and often long-term NSAID consumption.

IBS is a disorder of the large intestine that can cause belching, cramps, bloating, and diarrhea.

Lactose intolerance occurs when the body is unable to digest lactose properly. You can get diarrhea, nausea, and bloating, and frequent burping.

8. Disruption Absorption of Fructose or Sorbitol

This disorder arises if the body cannot absorb fructose and sorbitol properly. Nausea, bloating, and stomach pain are some of the symptoms.

How to Stop and Cure Burping

Below are some of the treatments to stop burping:

Burping after eating is a common thing. This is because there is some air that swallowed together with your food and your body reaction to release it is by burping.

When you eat too fast, it makes you swallowed air more than normal. The normal frequency is about 3 to 4 times after eating.

Besides don’t eat too fast, you also might consider to eat in smaller portion. One of the best way to prevent burping, bloating, and indigestion is to eat small but frequent meals.

In addition to eating small portions, you also need to chew longer to prevent digestion from working too hard. Chewing food for longer also helps the stomach empty more quickly and prevents someone from overeating. As is known, maintaining an ideal body weight is also one way to reduce the risk of frequent belching, flatulence and bloating.

As the body respond to release the excessive gas in the body, you will be burping frequently. These drinks also caused diaphragmatic irritation that will be released through burp or fart.

Below are the example of carbonated drinks:

Some people have habit to consume peppermint regularly to keep their breath fresh.

However, here is the fact that most people don’t know about. Peppermint contains a menthol as it main ingredient.

This menthol then work to release the trapped gas in your body. As the result of releasing the gas upwards, you will be burping.

According to the research, having a peppermint after a big meal is good for health as it help your body to release the trapped gas in your stomach that can cause stomach cramp. However, it is not recommended to consume it too frequent.

5. Consume Fibrous Food Instead of Fat

Fat food tend to stay in your stomach longer due to it harder process to digest. Bloated stomach is one of the impact of eating too much food that contains fat.

Instead, consume more of fibrous food such as cherries, grapes, peppers, grains, whole grains and nuts. Foods that contain high fiber like this can help keep digestion and bowel movements smoothly. Experts recommend about 20 to 35 grams of fibrous food every day to prevent flatulence.

You can drink ginger tea as a way to get rid of belching. The content in ginger can help prevent stomach acid from rising into the esophagus.

Antacids can neutralize the amount of stomach acid and prevent heartburn, which can cause belching. In addition, anti gas drugs such as simethicone can also help reduce belching.

Even so, always consult a doctor before you use any medicine so that its use is appropriate and safe for your condition.

Problems in the intestine because stress is very common. Problems with the intestine make a person accidentally swallows more air into the stomach, resulting in excessive burping.

Anxiety that occurs when a person experiences stress can also cause hyperventilation or a condition where a person breathes very quickly. Hyperventilation can contribute to the occurrence of belching constantly.

If you want to stop burping, you should consider to stop smoking as well. When you smoke a cigarette, air also enters the body. Quitting smoking may be difficult, but this needs to be done to maintain a healthy body.

Read Also: 10 Tips from Former Smoker on How to Quit Smoking

When do You Need to Visit Doctor

If you frequently burping but don’t experience other symptoms, you might need to make a small note about what foods or drinks you consume every day.

The reason is, belching can be caused by consumption of food containing gas. Also pay attention to your psychological condition, for example whether you are experiencing stress or anxiety disorders.

If you are not sure of the cause, see a doctor. Who knows you have a medical disorder that can be the mastermind behind the frequency of burping. If your burping is accompanied by other symptoms in the form of abdominal pain, nausea, or pain when swallowing, immediately see a doctor to get a diagnosis and medical treatment that is appropriate to the cause.