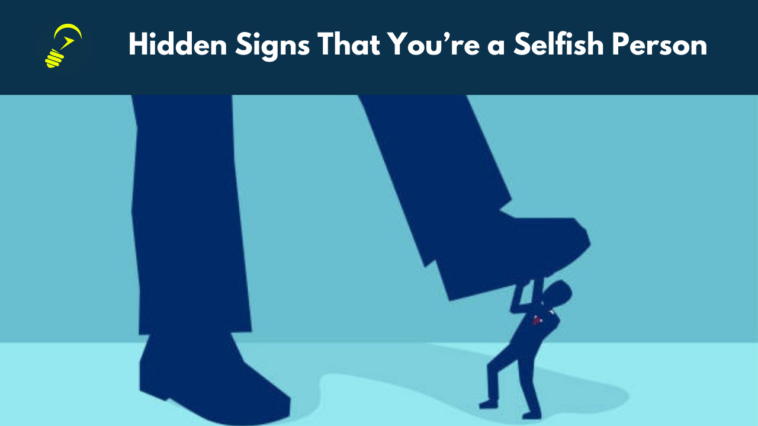 Individualism is necessary, but when we socialize, we have to rethink whether what we want or do can make other people lose or not. If we prioritize our own interests over others even to the point of harming people, that is called being selfish. If this is the case then we can be hated people. No one will want to be close or cooperate with us. To be clearer, here are the general signs of selfish people that need to be known.

1. Sacrifice Others for Your Own Purpose

One common signs that someone is selfish or not is sacrificing others for one’s own ends. If you see other people like that it’s better to just avoid it. If it turns out that you yourself have this mark, you should change that character because it will make you shunned by people.

Sacrifices will certainly occur, but it would be nice that the sacrifice did not involve many people. If you have to, make sure there are big positive benefits that can be obtained. But selfish people will not think like that because they will only think about themselves. If there are other people who can do it, why does it have to be him who works. Something like that, the mind and signs of a selfish person.

What will you do when you get criticism from others? Are you going to accept and then introspect yourself? Or maybe you don’t want to listen and are indifferent to the criticism? If you choose to ignore criticism, it is one of the signs that you’re selfish person.

The selfish person is at least willing to be criticized or anti-criticism. In fact, if you think about criticism well, it could be that there is something wrong or wrong with you and it can be a lesson to become a better person. If selfish people think criticism is just an insignificant thing, they think they are right so why criticize.

Everyone certainly has their own strengths and weaknesses. If you want to boast about your strengths, it is a natural thing not to do it excessively and of course not demean others. When there are people who feel that they are more than others and thus commit acts of humiliation or humiliation of others, this is not a good action and is considered selfish.

Selfish people love to boast about themselves. When they are at the top and feel superior, they will see other people as inferior to them. The further effect, people who feel superior will act arbitrarily to those who lose. They do not think that people will not always excel in one area, there will be other areas that are definitely weak and later the position will be reversed.

5. Feeling Entitled to the Award

Everyone will be happy if they get an award. The award is certainly not without reason, there are things that are done first then succeed and only afterwards are given an award. Such normal things are not understood by selfish people. They just want to get the award.

The selfish person feels that he is entitled to respect. Whether he’s doing the job or not, he just wants the award to be his. Thus, he felt that he was superior to others. In fact, they can also feel jealous if there are other people who get the award, not themselves.

Never expect that a selfish person will get their hands dirty or exhaust themselves for something. They prefer to relax but get an award or prize even though someone else is doing the job. So, they are really good at taking advantage of other people.

Selfish people never want to understand the feelings and tiredness of working people. They have a thousand ways to manipulate people into doing their jobs. When the job is done, the selfish person will claim it is their work and will not give any credit to the person who helped him.

Judging that person is easy for everyone to do. What is done is to position yourself in the person’s place and find out the reasons and options available to that person. Selfish people will never understand this, they just want to judge people.

Selfish people will not care about the feelings of the people they judge and what kind of impact it will have in the future. If they dare to judge in front of people, then don’t be surprised if they will do the same behind them. They do this because they feel they are better off and so have the right to judge people however they like.

8. Don’t Seen to Have Weaknesses

Since everyone has different strengths and weaknesses, it is only natural that there are things that cannot be done and when they do, things will go wrong. But when doing things they excel at, there won’t be any problems. There are some people who are willing to admit that they have weaknesses, while others cover them up.

Adults will certainly openly admit what they lack. Unlike selfish people, they don’t want to admit their weaknesses. Instead, they say what their strengths are, of course, with extra spices to make them look great. Selfish people hate looking fat in people’s eyes because it can bring down their self-esteem.

9. Do not want to admit mistakes

Everyone will definitely make mistakes. If someone reprimands us for what we did wrong, just accept fate. Even if they get sanctions for wrongdoing, they are also accepted as long as they are reasonable. However, if you tend to avoid admitting mistakes, it is one of the signs that you’re a selfish people.

Don’t expect selfish people to admit mistakes. Even if it was a mistake they had clearly committed, they wouldn’t want to admit it. Most likely they will pass the blame on to someone else. Anyway, whatever will be done so that they do not suffer the consequences.

Having an indifferent nature is important because not all things need attention. Especially if it is not important and does not have a direct relationship with us, why bother. But what happens to selfish people is different, they are completely ignorant of everything including those around them.

These selfish people only place themselves above others. What’s the problem with other people, they don’t necessarily want to help. Listening is certain, but whether it is willing to provide help or not is another matter. They want their interests to come first, other people want to agree or not, it is not their problem.

Alexandra is the content reviewer & senior author at Life Hack Solution.
Reach out at info@lifehack-solution.com.