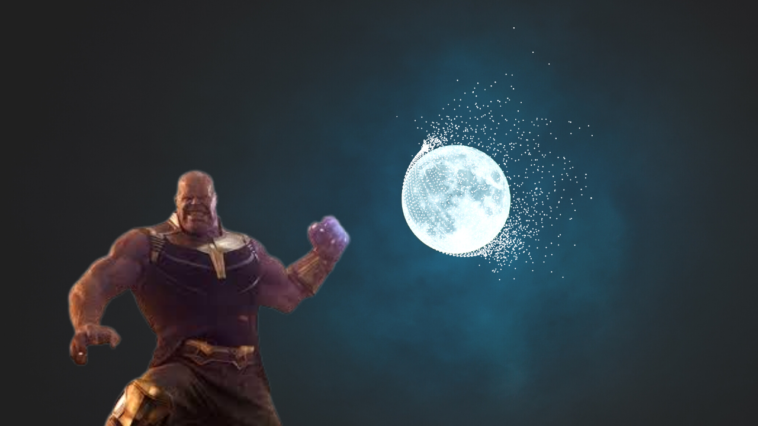 Have you ever wondered what will happen if moon disappeared? In this article, we’re going to list down all the possible things that could happen. Starting from climate change, animal evolve, and also the most interesting question; will it threaten the humanity?

Moon is the Earth’s only natural satellite and is the 5th largest satellite in the solar system. The distance between the Earth and the Moon is about 384,400 km with an age of 4.53 billion years. The existence of Moon affects Earth a lot, such as lighting at night, waves, eclipses, and so on. It’s been millions of years spinning around with the Earth, what would happen if the Moon suddenly disappeared or destroyed? Here are 9 things that could have happened if the moon disappeared:

The stable condition of Earth as it is now is not without reason. One of the reasons the Earth can rotate stably is the Moon.

If one day the Moon disappeared, the thing that can happen is that stability is lost. The Earth rotates irregularly as it revolves around the Sun. If this really happened, then everything on Earth would also be chaotic. Humans, animals, plants and buildings will be affected.

Besides the Stars, another thing that makes the night bright and beautiful is the Moon. With the presence of the Moon, it is the light of the night. When it is full moon, you can see it beauty.

If the Moon disappeared, it is clear that the night we are used to seeing, is not the same. There will be no more light at night.

Imagine yourself to go inside a fully covered bunker with no lights. That is the pitch black that you will see if there is no moon. We will only can rely to the street lights and some little lights from the stars.

If one day the Moon disappeared, the sea level and the waves will also happen to change. The chance of a tidal wave will be reduced by 40%. All the population of the living things in the sea will be reduced.

This will also affect human in global scale since fish accounted for 7% protein consumed globally.

Sea animals is not the only one affected with the moon disappearance. So are landed animal, but we’re talking about the nocturnal animals here. Nocturnal animal is the animal that hunts at night and armed with sharp eyesight.

Imagine when the Moon is not there, then no one helps this nocturnal animal to hunt at night. The dark night will make it difficult for animals to find food. In order to survive in this situation, animals will also evolve. Their eyes will turn sharper to help them find food.

With the Moon, the Earth has a duration of one day equal to 24 hours, the loss of the Moon could cause a day to be shorter than 24 hours.

The earth rotates on its axis at a certain angle of inclination. So far, the Earth can rotate stably because of the Moon. The gravitational force possessed by the Moon can make the Earth rotate steadily on its axis. If the Moon disappeared suddenly, the Earth would change its rotation and tilt angle.

With the eyes, a person can see the object in front of him. Of course with the new light we can see well. At night, the luminous object that helps illuminate the dark night is the Moon. When the Moon is not there, the night will be very dark. It’s hard to look around.

When the Moon disappeared, the natural phenomenon, lunar eclipse will never exist again.

A lunar eclipse is a phenomenon when the Moon is covered by Earth’s shadow. This phenomenon occurs when the positions of the Sun, Earth, and Moon are exactly in a straight line and the moon is in the full moon stage.

The moon does not exist for various reasons, so there is no object that covers the sun’s light.

Now, we came out to the final question, whether humanity will remain survive or die after the moon disappearance. Can we live without moon?

It might be difficult to adapt to climate, time, and food stock changes, but it is not that crucial until it can threaten the humanity.

But do not worry, there is no sign that moon is going to collide or disappeared anytime soon!

Read Also: What Will Happen if Earth Stop Rotating?