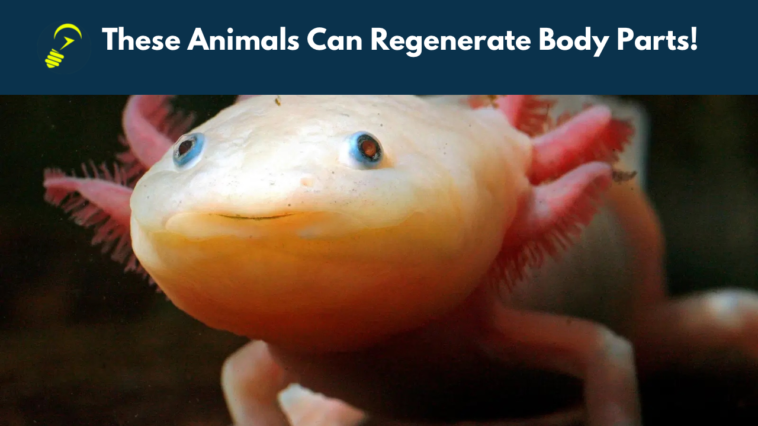 Wild nature is a very harsh world. The weak or those who cannot survive will die quickly. That’s why it is necessary to have certain abilities to survive. One of the most unique abilities is to regenerate some of their body part. Here are 10 animals that have regenerative abilities.

Having small eyes and a mouth that looks like a smile, axolotl can easily make people like this one animal. Axolotl itself is an animal belonging to the type of amphibian. This animal turns out to have a relationship with salamanders, especially the tiger salamander. Another name for this animal is Mexican walking fish. Even though there is a fish element, it should be reminded that axolotls are not fish.

The regenerative abilities of this animals is what really amazed the researchers. Even though its body parts have been cut many times, such as the eyes, mouth, legs, and body, the axolotl can still restore these body parts to normal. This ability until now has been the subject of research by scientists.

Not only on land, but there are also snails that live in the sea, called sea slugs or sea snails. On land, snails look creepy, disgusting, and are a pest that can damage crops. At sea, we don’t have to be afraid because they won’t bother us and plus their shapes and colors are really cool. Sea snails, including unique animals. They survive by stealing stinging cells from jellyfish.

If predators cannot be fought, there are still two ways to survive that sea slugs can do. The first is to spray black ink to obscure the opponent’s vision and the other is to sever parts of his body. The sea slug can sever its head and can grow its body like normal. The severed body part does not immediately die but can still live for some time even though the head will not be able to grow back.

Keeping animals such as cats or dogs is a common thing. Nowadays people are increasingly interested in raising more exotic animals, for example, such as lizards. There are many types of lizards themselves, there are more than 6000 species of lizards that have been identified. Some of the familiar ones such as chameleons, iguanas, geckos, tegu, and lizards are also included in the type of lizard.

Amphibians are arguably including unique animals. The unique thing about amphibians is that these animals can live in two places, namely land and water. Apart from being unique in being able to live in two places, amphibians have another unique ability, namely the ability to regrow lost body parts. And the salamander is one example of animals that have an amazing regenerative abilities.

Salamanders are a group of amphibians that have characteristics similar to lizards. The difference is seen from its slender body, blunt snout, short limbs, and has a tail in the larval and adult stages. The missing body parts from the salamanders can grow back to normal in a matter of weeks.

Having a small body, sea cucumbers can be easy targets for other animals that live in the sea. Even though it is small, it does not mean that the sea cucumbers will just give up when there are predators. This little animal has a unique way of defending itself from enemy attacks. Sea cucumbers can remove organs in their body which are very sticky towards the enemy.

Ordinary animals without internal organs would certainly die quickly, but sea cucumbers do not. Sea cucumbers can restore the inside of their body that has been removed. The inside of the sea cucumber’s body can grow and function as normal within 5 weeks. If you think that this sea cucumber is similar to a sea snail because of its shape, you are wrong. There is no relationship between the two animals.

For people who have a phobia of arachnophobia, they will definitely go away with the name spiders. Naturally, if there are people who are afraid of this animal. Especially considering that the spider has 8 long legs and the bite is quite painful. Not to mention that there are several types of spiders that have painful bites that can threaten human life.

The terrible shape, the painful bite, and the poison are not the only things that make spiders unique. Spiders have another unique ability which is the ability to regenerate missing body parts. If you chase the spider and happen to be able to cut off one of its legs, this part of the leg that was cut off can recover. To be able to regrow a lost leg, spiders must shed their outer skin, which is called an exoskeleton. This process is called molting.

Planaria is a type of flatworm whose habitat is in water. It can live in fresh water as well as salt water. If you keep ornamental fish and rarely clean the aquarium, then you can definitely find these planaria worms. They are small in size, between 3 mm and can grow up to 30 cm. Don’t try to cut these planaria worms in half as they will only increase in number.

Planaria worms are famous not for their unique method of reproduction, but also for their regeneration. You cut the planaria worm in half, then the part that was cut off will grow back into a new planaria worm. From the results of the research, planaria worms can still grow even though they have been cut to 1/279 parts.

Sea sponges are one of the animals with amazing regenerative abilities. They lack a circulatory, nervous, and digestive system. Miraculously, without this the sea sponge could still live, even for a long period of time. Sea sponges survive by doing symbiosis with bacteria called cyanobacetial which are responsible for photosynthesis and produce food for sea sponges.

However, it is not cyanobacetial that will be discussed but sea sponges. This sea sponge which has the ability to regenerate the body. If the sea sponge is damaged, then each individual cell will form a new sea sponge. If the damaged part is carried by the waves and lands in a new place, then that place will become a place for the new sea sponge to live.

It has no blood, brains, gills, starfish can live in water. Many people are curious about how starfish can survive without brains, gills and blood. Sea stars live by pumping sea water into their bodies. For starfish, sea water has sufficient nutrients to survive.

Even though they are called sea stars, not all starfish have a star-like shape. When a starfish loses a leg or body part, it can regrow the missing body part. Sea stars can lose parts of their legs or body to predators. The sea star predators are animals that have a body larger than sea stars.

Deer are one of the animals that are the target of many hunters. The reason is simple, deer have beautiful sharp horns. To take its antlers, the deer must be killed and its head cut off. These heads and horns are either used for display or sold at high prices on the black market.

In nature, deer use their long, sharp antlers to lure mates, fight with other deer, and defend themselves from predators. When the antlers are broken, the deer has the ability to regrow the broken antlers. In addition to deer, other animals that have horns and are able to regenerate are deer.