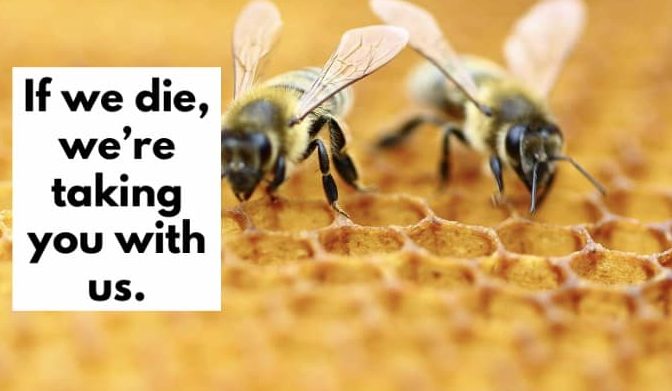 You might be wondering “What will happen if bees go extinct?” The answer is bees play a major role in the survival of humanity. An extinction of bees can threaten the whole ecosystem and food chain.

“I would not live the world without bees” said Jon Hoekstra on the interview of revealing the world’s without bees would be like.

“If the bee disappeared off the face of the Earth, man would only have four years left to live.” – Albert Einstein.

Although the quotes was popularly known to attribute to Albert Einstein, there is no proof that Einstein ever said that. ” It does sound like the sort of thing he might have said” said Michael Pocock, an Ecologist that expertise on bees.

How Important Are Bees?

You might be wondering how this tiny insects could have a great impact to the world if they go extinct?

In fact, bees are the most important living being on this planet. This statement has been declared by the Earthwatch Institute in the meeting of the Royal Geographical Society of London.

Here is why: almost 70 percent of the earth agriculture is depending on bees. Bees pollinate food crops, where it transfer pollen from one plant to another plant. It help to fertilize the plant which makes the plant can produce vegetables, fruits, and seeds.

Here are what will happen if bees go extinct:

As the bees disappear, pollinated plant consumer mammal will start to extinct. The disappearance of bees will slower down the reproductivity of those pollinated plant which leads to declining number of some of the plants. This will cause birds and mammals get a lesser source of food if bees are no longer around.

The extinction of bees might not be the end of mankind, but it would cause widespread hardship. Imagine that most of the food that we consume regularly won’t be available after no bees left.

Take almond plants as the example: The hulls of these nuts are used to feed the farm chickens and hulls. Fewer bees means fewer almonds, which could mean declining of livestock, less milk, cheese, eggs, and meat production. Not to mention that almonds are used in cereal, baking, and many other food products.

It expected that extinction of bees will caused a serious decline in world’s fruit and vegetables portion by half. With the expected half portion deduction, it won’t able to adequate 7 Billion population in the world.

Not only fruit and vegetables, the meat would be limited as well since the cows are relying from the pollinated plants as their source of food.

According to USDA, the bees disappearance will force human to switch their regular consumption to alternatives. As cow’s meats are going to be limited, other type of meat such as fish will increase to premium price as the demand will be high.

Fruits and veggies including apples, grapefruit, berries, melon, avocados, broccoli, cucumbers will be in short supply. There will be no more honey, coffee, and almonds.

Believe it or not, the disappearance of bees will also impacting the clothes you wear today. Cotton makes up about 35 percent of the world’s fiber use. Once the bees extinct, you can forget of those jeans, mattresses, towels, and other paper products.

The bees work of fertilize the plant are directly responsible for 70 percent of human’s consumption. This 70 percent can be converted to $200 Billion in the global agriculture revenue. Meanwhile, cotton is the biggest cash drop in US.

From the points above, it is obvious that the disappearance of our daily products such as food and cotton will greatly impact the world’s economy as well.

Should We Start Worrying?

A recent studies found that these bees have been mysteriously disappearing. An investigation by Colony Collapse Disorder found that average of 1/3 of commercial bees are abandoning their hives. Meanwhile, some beekeepers have reported that around 90 percent of their bees have simply buzzed off.

Mites, parasites, and virus might be one of the reason of the extinction of some bees colonies. However, many are looking at a class of insecticides called “neonicotinoids”. Many people are using this neonicotinoids to protect their plant from insects and pests. When one of the bee accidentally consumed this thing, it can bring the poison to the entire colony which lead to massive disorientation.

Other factor such as cold and long winter, less variable nectar, and lack of genetic diversity may be at blame. If this trend continues, the world’s food chain could be at risk.

What You Can Do to Save Bees?

As we seen, bees play a crucial role in human’s survival. Now you know how the world will be without these bees. There are some easy and simple steps to save bees that you might not aware of:

2. Plant Flowers in Your Garden

Cultivate bee friendly plants and flowers such as snapdragon, lavender, foxglove and any flowers that produce pollen and nectar the bees can eat.

3. Avoid Using Pesticide in Your Own Garden

With the declining of bees population, it is important to keep our homes pesticide free. While bees lives in urban environment, their main source of food is from human’s yard. Pesticides are extremely harmful to bees and it can harm to the whole colony while it return to the nest!

The last thing you can do to save bees and the whole humanity survival is by sharing this article. The more people know about how important the bees are, the lesser chance bees will extinct. Go out there and save some bees!