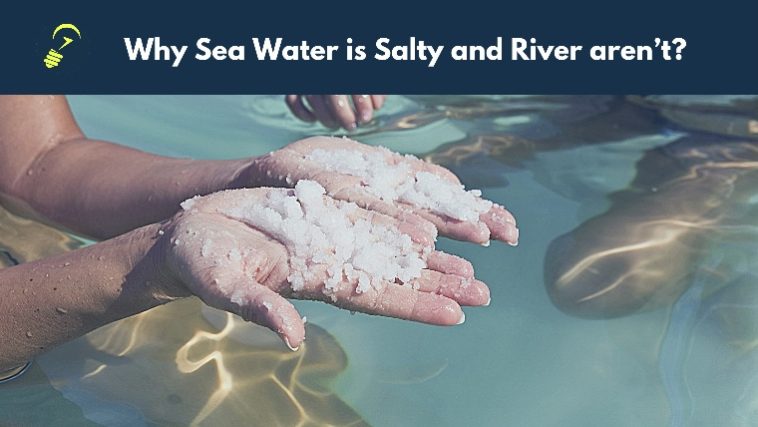 During your visit to the beach, have you ever swam and accidentally drank sea water? Have you ever consider why the sea water is salty?

Why The Sea Water is Salty?

The sea water is salty because it contains a lot of salt. But where the salt came from?

Whether we realize it or not, it turns out that all the water has an element of salt. Whether it is groundwater, rainwater, or river water.

You must be curious about how much salt is needed to make this vast sea salty.

According to the research, it turns out that nearly 3.5 percent of the ocean’s weight consists of salt. If we convert, there are approximately 50 million billion tons of salt dissolved in our oceans.

So Where The Salt Came From?

Sea water does come from rainwater. However, that doesn’t mean the rainwater tastes salty at first.

The rainwater that falls will flow into the rivers. This river water will eventually end up in the sea. During this water’s journey to the sea, they carry various mineral salts, such as calcium, potassium, sodium, and so on.

Various mineral salts are obtained from various things, such as rocks or the earth’s crust through which the water flows into the sea. After that, the water will evaporate and become a cloud.

Meanwhile, this mineral salt will be left behind and this is what ultimately causes the sea water to be salty. The evaporated cloud will then rain down, and again repeat the process for millions of years.

Volcanic activity that occurs under the sea and volcanic eruptions that are under water can also be the reason why sea water is salty.

In the process, seawater reacting with hot rock will dissolve some of the salt minerals. Some of the dissolved salts react with the hot rock and separate from the water.

The saltiness of sea water can also be affected by land. When it rains on land, water will enter the ground little by little. When the land is full and cannot accommodate anymore, the water will come out little by little through the river, and finally to the sea.

Land that contains a lot of salt and minerals, will have an impact on the flow of water towards the sea, so that it can affect the taste of sea water. This is another reason why sea water is salty.

Concentration of Salt Levels in the Sea

The salt concentration in seawater also varies, depending on temperature, evaporation and precipitation. The salinity, or salinity, of seawater is generally lower in equatorial and arctic regions, and can be high in areas in the mid-latitudes.

The Dangers of Consuming Sea Water

Imagine you’re stranded in the middle of ocean for few days where there is no water and food nearby. You might desperately think about consuming sea water. The question is, can we consume sea water even you’re in a desperate situation?

Drinking sea water is not allowed, even if you are in a condition to survive in the sea.

Salt water is water that has been contaminated with salt and other minerals, such as mercury or arsenic. And sea water itself is an example of water that has a very high salt content.

There are several health problems if we consume sea water. Some of the health effects of drinking sea water are as follows:

Drinking sea water will actually make our bodies dehydrated. This is because salt itself can also dehydrate the body. Therefore, the more salt water you drink, the more body fluids you will lose.

If you drink seawater, the remaining water that is already inside your body will be diverted to help the body dissolve excess salt. As a result, other bodily functions will start to suffer due to insufficient water intake in the body system.

This explained why you can’t even consume a salt water even if you’re desperately in the middle of survival.

Read Also: 9 Ultimate Survival Tips That Will Save Your Life One Day

Within a few hours of drinking salt water, you may experience symptoms related to high levels of salt in the body. The initial symptoms can be marked by severe diarrhoea and won’t go away. This is because the intestines can only absorb a certain amount of salt over a period of time.

Long-term intake of salt water causes severe dehydration, which can have serious effects. The body tends to lose large amounts of water and can experience hallucinations and delirium.

The worse scenario, you can lose consciousness and suffer seizures. The human body can’t function well without water. When it loses 15 percent of the total water in the body, the risk for coma, brain damage, and even death increases.

The Earth, where we live, is about 70 percent water. However, from that much water, there is only about 2.5 percent of fresh water that we can consume. The rest, about 97 percent is salty sea water.

Then, why isn’t the salt sea water processed into water that we can consume?

There are several obstacles to make this idea happen. The first obstacle is that the sea water treatment process is expensive and also requires a lot of energy, compared to when we treated fresh water.

In addition, the presence of algae in the sea is also an obstacle. Because algae can clog the filter, making the processing process difficult.