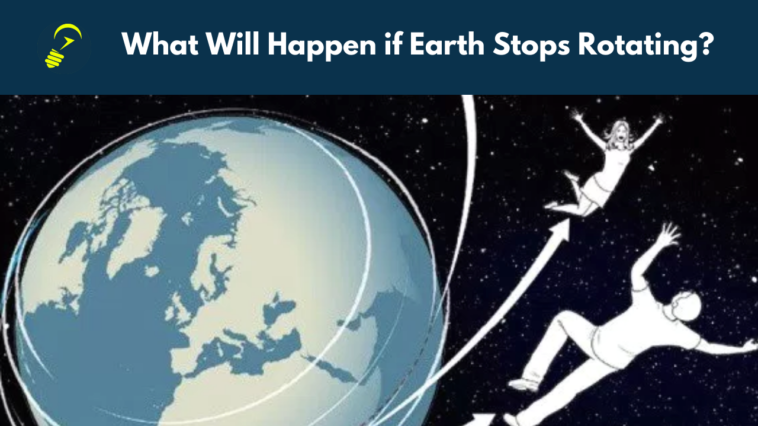 1. The Human Population Will Extinct

Earth’s rotation becomes a protection for living things that live on Earth from natural disasters. If the Earth stops rotating, there will be many natural disasters that can happen. For instance; tsunamis, earthquakes, volcanic eruptions, and even loss of magnetic fields make Earth’s temperature change drastically.

Earth which is now a perfect planet for living things. When the Earth stops rotating and these natural disasters all occur simultaneously, it is unlikely that any living thing will survive. Not to mention that people will fly at high speed if the Earth suddenly stops rotating. It could be that this is the time when humans will become extinct from Earth.

2. The Sun Will Rises From the West, Sets in the East

In fact, the sun rises from the east and sets in the west. This is something we have experienced often and surely. When suddenly there are things that can cause the Earth to stop rotating, there will be major changes on Earth and can affect the living things that live in it. One of the changes that can happen is the changing direction of the rising and setting sun.

Read Also: Why is The Sea Water Salty? Can You Consume it For Survival?

3. The Great Continent Appears On Earth

Thanks to Earth’s rotation, everything can stay on land. When there is something that causes the Earth to stop rotating, bad things will happen. The earth may stop, but the seawater to the atmosphere will still move. Not only moving slowly, but moving at high speed.

The time system and calendar that we use today have been arranged in such a way by ancient experts. They determine a 24-hour day, up to a 365-day year, based on the rotation of the Earth on its axis. When the Earth stops rotating, there will be extreme changes in time and calendar.

Read Also: What Will Happen If Bees Go Extinct?

Don’t ever expect the Earth to stop spinning for some reason. You will not know what will happen if the Earth does stop rotating. In your mind you may think well because the night is longer, so rest longer. Or the afternoon becomes longer and can play longer.

When the Earth stops rotating on its axis, one of the things that will definitely happen is that one side of the Earth will continue to face the Sun, while the other side will face a different direction. The side facing the Sun will be exposed to tremendous heat. then will the other side be safe? Certainly not. On the side that doesn’t get sunlight, temperatures drop dramatically, as cold as the Arctic. And this will last for 6 months.

7. The Earth’s Shape Will Change

If the Earth suddenly stops rotating, this centrifugal force will automatically disappear. The equator will change, change to make the Earth look perfectly round. If there are flat earth adherents here, don’t ever expect that the Earth will turn flat even though it stops rotating.

8. The Disappearance of Earth’s Magnetic Field

Earth has a magnetic field generated by superheated metallic liquid in the Earth’s core. Coupled with the rotation, making the hot metal move and generate geomagnetic forces. This magnetic field helps human life by determining the direction of the compass, satellite, GPS, and also protects the Earth from things in outer space.

Natural disasters will inevitably occur and allow loss of life and material loss depending on the severity of the natural disasters. It could be earthquakes, volcanoes, floods, tsunamis, and so on. Therefore we as humans create various ways to detect or even reduce the damaging effects of natural disasters.

When the world is still running as normal, everyone can do activities as usual. In summer like this, it is most fun to spend time enjoying the beauty of the beach. However, all these activities will not be able to be done again if the Earth suddenly stops rotating on its axis.