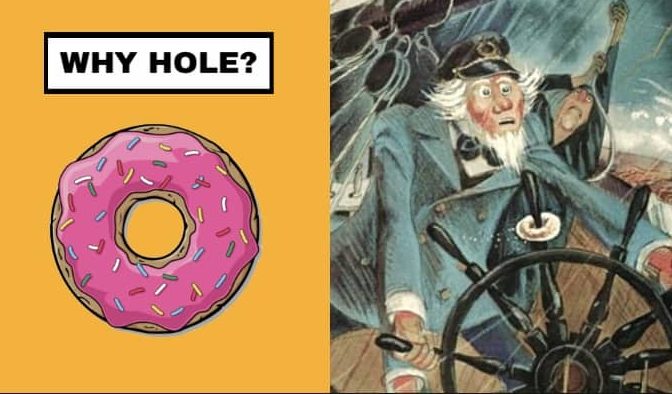 Have you ever wondered why do donuts have holes in the middle?

Doughnuts or what we often to call donuts have been popular in all over the world. This round shaped cake with a hole in it middle part, is a favorite for many people because of its flavor variants.

You can find donuts with a variety of sweet toppings such as chocolate, vanilla, Oreo, strawberry, and many more. In addition, there are also donuts that are dominated by savory flavors, such as shredded topping donuts, sausages, and so forth.

Not only used as snacks, donuts can also be used as a companion when drinking tea or coffee. Some even make donuts the main menu for breakfast.

While consuming donuts, have you ever wondered why donuts have holes in the middle? Why isn’t it on the edges? Is the hole in the body of the donut just a decoration so that the donuts look unique and different from other cakes? Or do you think there is a function?

The Holes in The Middle Part of Donuts is Not For Decoration!

The hole in the body of the donut was not a decoration, this is a strategy so that the cooked donuts can be evenly distributed.

This ring-shaped cake was deliberately shaped so. Because the hole in the body of a donut can maximize the cooking process. Existing holes in the donut can make evenness. So that the middle and edges of the cake have the same level of maturity.

Olykoek, The Ancestor of Donuts 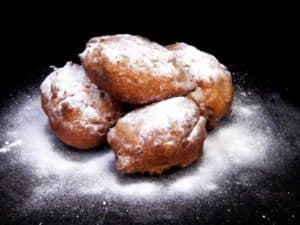 Before we go to the story, we would like to introduce you to “olykoek”. Olykoek is the “ancestors” of the donut which was introduced earlier.

Olykoek or ‘oil cake’ is a sweet cake fried in oil. It just look like a normal donut but excluding the hole in the middle part!

Olykoek became popular in New York in the 16th or 17th century and normally served with coffee.

Hanson Gregory, The Founder of Donuts With The Holes in It Center

There are many theories about the origin of holes in donuts. However, the most popular story is the Hanson Gregory.

Since the 16th century many Dutch have traveled across the ocean to the American continent. The sailors were supposed to bring cooks who usually made olykoek for the crew.

One of the sailors who traveled to the American continent was Captain Hanson Gregory. This American man declared himself to be the creator of a hole in a donut in 1847. At that time he was still 16 years old and he worked as a sailor.

At that time his ship was wading the vast ocean, suddenly a storm hit. Captain Gregory, who was eating olykoek, must immediately take control of the boat.

Confused put the cake, without thinking he immediately stuck the cake into one of the steering wheel, so that it makes a hole in the middle. After the storm ended, he realized what he had done and felt the cake looked even more attractive.

This is the answer View Image The name Olykoeks also changed its name to ‘donut’ which is a sweet mixture mixed with peanut crumbs. Later the word donut has decayed into a donut, although the original word is still used.

This worldwide donut day is celebrated every first Friday in June. Historically, donut days began when fundraising for The Chicago Salvation Army for army safety in 1938, more precisely to honor female volunteers in World War I who prepared donuts for soldiers behind the front line.

Other Versions of The Story

In addition to the story of Hanson Gregory, it turns out there are also other versions of the history of donuts. Some people believe that the creation of donuts is because donuts were popular in the same era as bagels.

Street vendors will usually sell bagels by putting them on poles that are stuck on their carts. It is believed by some people why donuts also have a hole in the middle. Of course it can be sold in the same way.

Now you know why do donuts have holes in the middle and the story behind it! Check out our other post to satisfy your curiosity: What Will Happen If Bees Go Extinct?