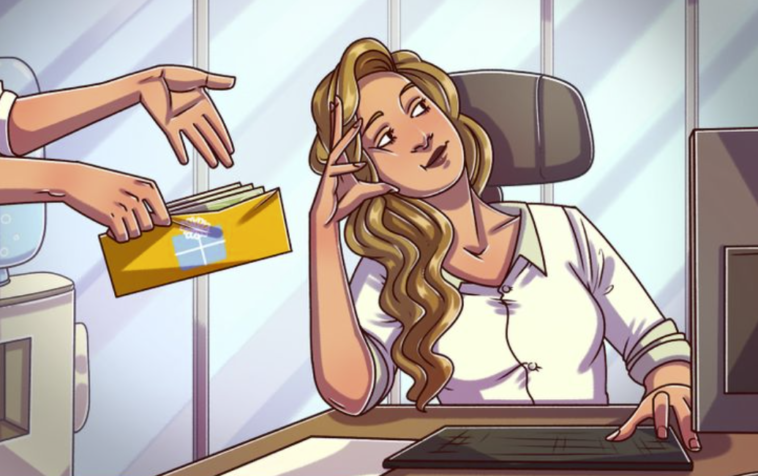 One of the nightmares that must be faced by an employee in his office is having to deal with selfish colleagues. Friends like this are very toxic and it is not impossible to hinder our careers.

Imagine how dizzy it is when we have to face the colleague every day. Let alone being invited to make friends, even just chatting sometimes becomes an arena for debate about who is better.

So, instead of getting dizzy, let’s follow 9 ways to deal with selfish colleagues:

Dealing with coworkers who want to win constantly is something that is not easy. Many people feel bullied by colleagues like this.

Therefore, the first thing you need to do is prepare yourself mentally. Keep your head cool. Because if you get emotional, you will fall into the co-worker’s trap.

The reason is, when you are emotional, you will start to be illogical. Your co-workers can exploit this condition to make themselves look better in front of the boss. So, calm yourself down.

You can’t deal with selfish colleagues by doing the same thing as they do. If you do, the office conditions will become hotter. Other co-workers will also be confused by your change in attitude.

Instead of copying that misbehavior, you can create a collaborative climate in the office. Because collaboration is the opposite of competition. By prioritizing collaboration, we can fight self-defeating behavior.

It is not easy to do this. But we can start with colleagues who are not toxic first. Create relationships that help each other, not bring each other down.

3. Make Friendship with other Coworkers

Having reliable friends in the office is very important. Especially if your office is always tense because someone is being selfish and narcissistic.

Remember, as explained in point 1, facing a coworker who wants to win alone is very tiring. Therefore, forge a genuine friendship with one or two of your trusted coworkers.

Their presence will make you calmer when need to deal with selfish colleagues. You can confide in them to seek support when they are cornered.

One of the characteristics of someone who wants to win on his own is his love of debate. Such a person will defend his opinion even if it is completely unreasonable. In fact, spending time in debates like this is clearly unhealthy.

Therefore, learn to stop the debate elegantly. You can even make jokes when your friend starts to want to argue.

For example, your friend is insisting that your work is subpar. Even though the authority to assess your work is your boss.

Instead of getting angry, just tell him that you didn’t know your partner had become the new boss. Say this in a joking tone so that he will feel ashamed of himself.

If you are the type of person who is shy and quiet, at first you will feel awkward. But over time, your persistence will pay off.

Related: Leadership Quality: Does Leader Need To Have A Strong Technical Skill?

To deal with coworkers who want to win on their own, we must learn to argue well. This is very important if you have to argue with the colleague. For example, before the regular monthly meeting.

Concocting a good argument yourself is not a difficult thing. A good argument is an argument that is logical and has adequate data and fact support.

For example, you have an opinion about next month’s marketing strategy. So, complete the opinion with valid data, easy-to-understand reasons, and supporting expert opinions.

Avoid just having an opinion without the support of data and expert opinion. You will only become an easy target if you are determined to do it.

6. Focus on Your Work, Do Your Best

Associating with those who want to win alone will drain our energy. And the bad news, things like this can affect our work performance.

As a result, our image in front of superiors and other colleagues can become negative. We too will be the “losers” that selfish co-workers really hope for.

You don’t want that to happen, do you? Therefore, you must learn to control your emotions and focus on your work.

Think of the family you support at home. If you are single, learn to love yourself by ignoring toxic people. So, you can focus on useful things only.

The logic of people who want to win themselves is an extreme black and white logic. For them, there is only winning vs losing. There is no cooperation term in the heads of such people.

Therefore, when they are arguing with a winning tendency, show a point of view that emphasizes cooperation, not competition.

For example, in a meeting, your friend is busy blaming your other colleagues for being incompetent. You can argue that a project will only be successful if the team can work well together.

Therefore, if one of them is considered incompetent, the other partner should teach or ask for a solution from another colleague. Say that blaming other friends after the project is finished is not a solution, but rather childish.

8. Inform Indirectly to the Boss

There are times when we have to involve our superiors when facing coworkers who want to win on their own. This action needs to be taken if the friend’s attitude is really out of bounds. Or, if the behavior of a friend has been materially detrimental and demeans self-respect.

For example, friends often downplay your role in a project that causes you to be reprimanded by your boss. Not only that, your friends do it when you’re not in the office.

Cases like this simply cannot be tolerated. But remember, we have to keep our heads cool. Don’t suddenly walk into the boss room sadly dramatically. Don’t whine like a child to its mother.

You have to be smart. You have to raise this issue in a subtle way. For example, in the next project, actively argue by relating to the previous project. Emphasize what you used to do elegantly.

Next, work more actively on the new project. Also make sure your boss knows the portion of your contribution. That way, your boss won’t just believe in your toxic friend’s instigation.

9. Support Him When He Starts to Change

Nobody knows the future. A person may change his attitude for one reason or another. This incident can also happen to your friends who want to win themselves.

At times like this, it is very important for you and your colleagues to support this attitude change. The trick is not to constantly insinuate his past actions. As much as possible, we also don’t need to praise him excessively because it actually creates an awkward atmosphere.

Just strengthen relationships with friends who want to win themselves. Invite him to hangout together or just have lunch. In this way, we are already sending a signal that we welcome the friend’s change in a positive light.

Facing a coworker who wants to win himself in the end is not an easy thing. We have to make sure our heads stay cool even in the heat of the moment. Because the attitude of the friend tends to make the people around him feel humiliated and even harassed.

However, with the proper way as described above, we can certainly overcome this problem. So don’t think about resigning right away. Because even if you resign, your new office is not necessarily free from people who want to win themselves.